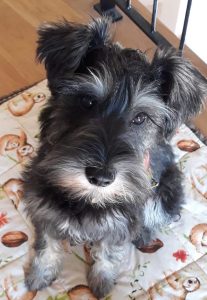 Albert Claude is 6 months old. For the first 2 months of his life he lived in a puppy farm in Northern Ireland. A puppy farm run by Eric Hale and his wife. A name that may be familiar to a few conscientious watchers of puppy farm documentaries and exposés. For Eric Hale’s puppy farm is a place that has long been known about by those who find the business of puppy farming abhorrent, whether it’s legal or illegally done. And while Eric Hale’s is a legal operation that doesn’t make it palatable.

Eric Hale’s puppy farm in Armagh is a puppy farm that is so large it confines hundreds of dogs. It’s a monster-sized puppy factory. It’s a breeding factory that sends hundreds of puppies out to be sold across the UK. It’s so big an operation that in 2016 it attracted the attention of BBC Panorama and featured in the BAFTA award winning documentary Puppy Dealers Exposed.

In 2017 I put this out on social media about Eric Hale and his puppy farm. 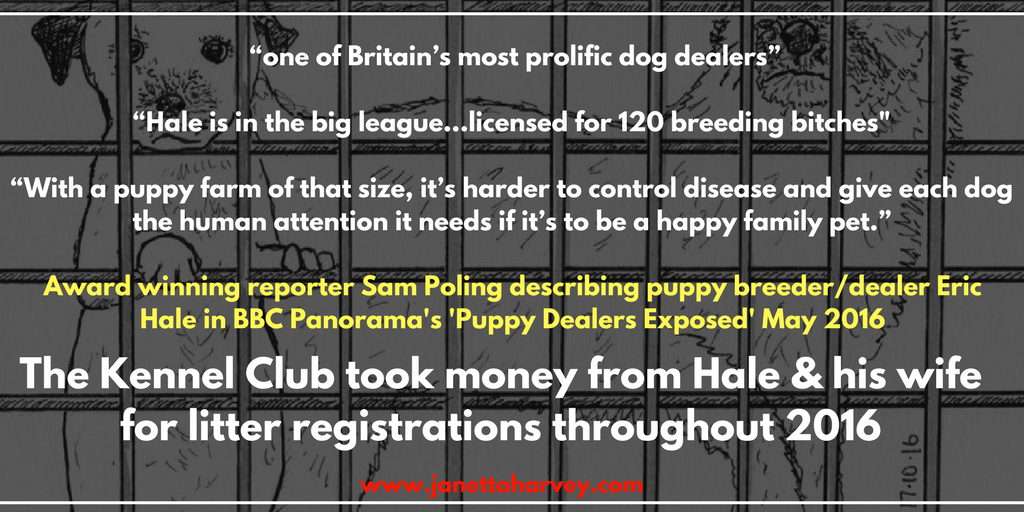 Following the airing of the Puppy Dealer’s Exposed documentary, press coverage was high, it shocked the nation,

Mr Hale breeds his dogs and then takes them to England via the night boat to Liverpool. The following day he drives round the country, dropping the dogs off to the next link in the supply chain, from large scale sellers to country lay-by dealers.

Dr John Bradshaw, canine behaviour expert at the University of Bristol, saw secret footage of Hale’s puppy farm and said: ‘If they are in there 24/7 then those dogs are seriously deprived. They are basically in jail.’

Eric Hale’s beagles are Kennel Club registered and have qualified for Crufts in the past. Poling describes him as “one of Britain’s most prolific dog dealers”.

Every Tuesday he loads his van with crates of pups, travels by boat to Liverpool and drives around the country dropping dogs off to the next link in the supply chain.

She adds: “Hale is in the big league. We discovered he was licensed for 120 breeding bitches.

“With a puppy farm of that size, it’s harder to control disease and give each dog the human attention it needs if it’s to be a happy family pet.”

Sam Poling, the journalist behind Puppy Dealers Exposed had this to say about her investigation of Eric Hale and his puppy farm,

My journey began six months ago when I heard of a man who was believed to be one of the country’s most prolific dog dealers. He was a breeder in Northern Ireland and I knew his dogs were being sent around the UK, sold to small-time sellers and big commercial dealers. I also discovered he was supplying one of the UK’s biggest puppy superstore chains. It was only when I began digging into his business that I realised he was on the radar of several animal welfare agencies who had concerns about the way his dogs were being housed and bred.

This is where Albert Claude was bred, where he spent his formative weeks.  It’s where he’s left behind his mum and dad. So, while we enjoy seeing our new boy loving life, keen to learn, eager to make the most of every second of each day, I never, not for one iota forget how damn lucky he is to be out and away from Eric Hale and the horrors of his breeding sheds.

Albert’s life could have been very different if fate had dealt him different cards. His life may have been spent – like his dad’s – in the dark, filthy, noisy hell of Eric Hale’s industrial scale breeding farm in Northern Ireland. Instead of being out and running freely like every dog should have the chance to do, Albert’s days could have been limited to existing in a few square meters of hell.

The 2 months he spent there with his nursing mother, whose life I can hardly bear to ponder, have left no obvious emotional scars. But, I am under no illusions, the work I do with Schnauzerfest shows me enough to know that he may have unforeseen problems in future due to poor breeding. But, whatever happens, he is with us and for that I am forever grateful.

So, Albert is 6 months old. He spent 3 weeks with DBARC after he was surrendered by a person who didn’t want him, waiting for me to collect him. So in the time between leaving Eric Hale’s puppy farm, where was Albert? It turns out he spent over two months unsold in a petshop. And when he was eventually bought – for £650 – after one night in his new home, he was given up on by his new owner, and DBARC took him in.

I believe in the sun, even when it rains.
~ Anne Frank

Read more about the history of Eric Hale and his puppy farming career here.