I was recently contacted by 12 year old reader, Aimee, who had chosen puppy farming as the topic for the BBC’s Annual School Report. This is a BBC News and BBC Academy project which supports 11-18 year olds in producing and broadcasting their own reports and stories. What an inspirational young person Aimee is. I was deeply impressed by the questions she put to me and later on, to hear her interview with Bill Lambert, the Health and Breed Services manager for the UK Kennel Club during Crufts weekend. These words from my favourite writer, Maya Angelou, came to mind as I’ve gotten to know Aimee more over the past few days, we need more like her and her friends…

The need for change bulldozed a road down the center of my mind.

I wanted to know more about what motivated Aimee to tackle the topic of puppy farming and am grateful that she took time to do a sort of reverse interview for me. You’ll see in her answers that I was – granted only in a small way – on the same page as the Kennel Club (that’s possibly a first!) in giving Aimee time and help. I love her impromptu survey she did at Crufts and her insight and analysis. So, something for me to enjoy from an annual event I dislike and I’m thankful to Aimee for lightening my view today.

If I ever feel the monolithic puppy industry is just too much to battle, or my optimism for a better future for the dogs wobbles, I’ll remember they have people like Aimee on their side.

Q. Tell me about your interest in dogs.

A. I have loved animals from a very young age and have always stopped to say ‘hi’ to dogs. I had my first dog in 2015, near to my 10th birthday. We did lots of research on different breeds and where we wanted to get one from. We were worried about puppy farms and so chose an Assured Breeder through the Kennel Club scheme. Now we have our beautiful miniature schnauzer named Frankie. From a very young age we took Frankie to be socialised at an indoor dog park and we have taken 4 training courses run by the Dogs Trust to make sure that Frankie could be the happiest dog she could be.

When she was 5 months old, I entered Frankie into 6 categories at a local fun dog show in South Wales with over 300 dogs. We didn’t come anywhere until the last category of Best Junior Handler. Frankie was so well trained and behaved and so well socialised that we ended up winning this category. This allowed us to enter Best in Show and we won that as well.

So Frankie and I have an amazing bond and relationship. We have entered a few fun dog shows since then, even our local show run by the Police where Frankie was the only dog that showed up. Needless to say, we won first place and a huge hamper of dog treats and toys! Frankie very kindly donated most of these to the RSPCA Rescue Centre. I have also judged fun dog shows at the request of our local indoor dog park and participated in our local Schnauzerfest walk in Barry. Frankie sleeps at the end of my bed, follows me everywhere and also goes on holiday with us. We are each other’s best friends! 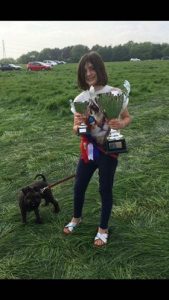 Aimee and her best friend Frankie

Q. When did you first become aware of puppy farming?

A. I became aware of puppy farms during my research into getting Frankie. But, I didn’t really understand them. It wasn’t until one of my friends bought a puppy which became really ill at a very young age that I started to really understand. My friend’s puppy was also a miniature schnauzer but I realised her dog didn’t look or seem at all similar to Frankie. I thought this was strange, so I did some research and came across puppy farms again. By this point I was certain that my friend’s schnauzer had come from a puppy farm. It always seemed sad and ill, it didn’t like walks, it didn’t look quite right and it had lots of digestive problems. I felt very sad that my friend and her parents had fallen for the tricks of the puppy industry and their poor dog was suffering the consequences. From then on, I decided to find out as much as possible about puppy farming and try to advise my friends who were interested in getting dogs. I bought your books which helped me understand in huge detail.

Q. Why did you decide to make puppy farming your topic for the BBC School Report?

A. Whenever I have an opportunity to choose a topic for myself at school, it is always about animals and animal welfare. For my English assessment, I did a speech on puppy farming to my entire class. I knew so much and was so passionate that I got the highest mark in the class!  When I heard about the BBC School Report, I decided I had to participate in this as it was another opportunity for me to spread awareness. I roped in 5 of my friends and we all played a part in contributing to the report. I took this so seriously that I emailed you (Janetta) as I had read your books and I also emailed the Dogs Trust, the RSPCA, Noel Fitzpatrick (Supervet), Claire Balding and the Kennel Club to ask for their help.

I found it disappointing how the rescue organisations said they were not in a position to talk about puppy farms and would rather talk about subjects of their choosing such as puppy smuggling. However, you Janetta and the Kennel Club both agreed very quickly to help me.

Q. Was this your first visit to Crufts? Did you enjoy interviewing Bill Lambert?

This was my third visit to Crufts. I disagree with parts of Crufts – particularly the dogs who are bred with exaggerated features which cause them problems. However, there were people and Rescue Organisations trying to spread awareness. There are also clearly a lot of people and owners at Crufts who love dogs. I find Crufts a big learning curve as there are so many different aspects to do with dogs there.

Whilst at Crufts my fellow BBC reporter and I carried out a survey to see if people would support a law to limit the number of dogs that anyone can legally keep for breeding purposes to no more than 5. Our results showed that 50% people would support this. Seventy percent of those we surveyed didn’t realise that puppy farmed dogs could still be registered with the Kennel Club. One hundred percent of people were aware of puppy farms and 100% knew that puppy farmers trick people. I found these results surprising.

Whilst at Crufts we interviewed Bill Lambert who was very helpful but I felt that he didn’t answer a few of my questions as fully as he could have done. I felt his main focus was to defend the Kennel Club rather than to take action against the puppy farmers. I realise the Government also has a large role to paly in this as well.

Q. Do you have any plans to do more reporting or campaigning on puppy farming?

A. Definitely. Next year with the BBC School Report we will probably be doing puppy farms again to see if anything has changed over the last 12 months. I will continue to support events such as Schnauzerfest and I will try my best to raise awareness wherever and whenever I can. I have ambitions to be a vet and to own my own practice with an adjoining rescue shelter. I would like to take in ex puppy farmed dogs and rescue dogs and help them get the best chance of a happy and healthy life.

Q. I know you have read my books, what do you think about them?

A. I think they’re an amazing way of spreading awareness of the awful things that go on at puppy farms such as dogs being pulled by their tails, never leaving their compound, never going for walks, being constantly bred and the grief the mums must feel when their puppies are continually removed. Also, how difficult it is to rehabilitate a mum dog such as Susie Belle. I feel very reassured that there are people like you trying to help the dogs and making people realise that this is so important.

Q. Do you think my books help people understand more about puppy farming?

A. Yes definitely. I had no idea of the practices that go on and how badly the dogs are treated. Because books are generally not one or two pages, it’s an easier way to understand the concept of puppy farming, particularly when you focus on one dog in particular and its experiences. I always donate books about animal welfare to my school library after I’ve read them.

Q. If you could wave a magic wand and change things for the dogs, what would your one big wish be?

A. I would ban puppy farming and bad breeders completely but I know that’s a big magic wand! If puppy farms still existed I would change the amount of litters any dog can have to a maximum of 3 in their lifetime including working dogs. And, a licence for anybody keeping an unspayed or un-neutered dog to show that their dog is not going to be bred more than 3 times. I would like any puppy farm owners to be sent to prison for a very long time to stop others from doing the same. For the dogs, I think that there should be special rehabilitation centres and rescues dedicated to them and raising awareness.

Q. Tell me what you would like to see everyone do to help the dogs have better futures.

And on that note, these words from Maya Angelou are perfectly appropriate for young Aimee…

I love to see a young girl go out and grab the world by the lapels.

(I will post a link to Aimee and her friends’ BBC School Report as well as her interview with Bill Lambert in a future blog post.)