When we bring dogs into our lives we begin a story of love and loss. It’s almost inevitable that at whatever age they join our home, whether a puppy or older, we will outlive our beloved companions. When we let dogs swell our hearts, we know the chances are that we’ll be faced one day with the hardest decision and it will be shattering to our swollen, aching hearts. A decision which demands of us utter selflessness at the exact moment when we feel overwhelming sadness and the piercing, grip of grief.

This is the agonising reality for my friend Kathleen who has just seen through the noblest, bravest decision for her dog Darcie. Six and a half years of a shared life together following Darcie’s adoption on New Year’s Eve 2011 ended today. Her frail, brave body with her confused, dementia baffled mind, finally told Kathleen it was time to depart. Her absence will be felt acutely for a long time to come.

Darcie’s life has been hard beyond imagination. Even in the safe loving home where she’s been deeply loved with all her troubles in tow, her days have not always been easy. Irreparable damage was done to her in the puppy farm from which she’s never fully recovered. It’s scarcely possible to perceive the extent of harm done to Darcie’s mind. She has never been able to seek comfort from Kathleen in any normal sense that a dog does. For Darcie the common bonds felt between dogs and humans never readily manifested.

In the strange world she found herself in once saved from the puppy farm, where everything was terrifying, Darcie has not found easy passage. Her past has pulled her around, plagued her existence and refused to allow her to be fully at peace. Her problems remained many and ran deep through her core, affecting everything about this darling dog. She’s lived constantly tensed against imagined terror, which has prevented her from fully embracing all that her good, safe life with Kathleen had on offer. 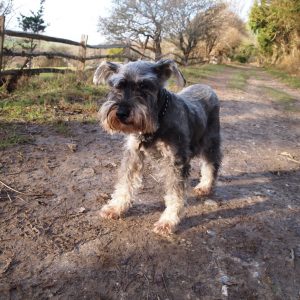 But, in the presence of endless love and unconditional assurance provided by those closest to her, Darcie’s anguish has at least receded, if not entirely disappeared.  Steadily, quietly, in her way Darcie has bloomed over the years. Not into a happy-go-lucky carefree dog, but into a distinguished, unique old lady.

Her quieter mind has been greatly aided by the conditions Kathleen and her family provided from the moment she arrived in their home. Darcie was only Kathleen’s second dog and first adopted one. It was less a case of jumping into the deep end of adoption, more a vertiginous leap as Darcie’s difficulties exceeded any gauge of what might be expected when adopting a dog. Untouchable, unreadable, unmistakably terrified best describes her through her first years.

She has been vividly present in Kathleen’s world for six and a half years, never dull, never predictable, never mundane and always utterly loved. Puppy farming robbed her mind of being able to function in any normal way but that made her remarkably special. Her stoicism, resilience and sheer strength of character to continue living in a scary, confusing world demands every ounce of respect.

Kathleen has done everything possible to make Darcie’s life safe, secure, peaceful and overflowing with love; today, her courage has ensured that Darcie’s departure from this world was exactly that. Darcie suffered so much in her life and knowing that she has been spared unnecessary suffering has to be comforting. By adopting her, Kathleen has shared years of devoted companionship with Darcie and although it took a long time, she did eventually reach the stage where she recognised love and trust.

Moreover, by her adoption, Darcie was spared the awful fate of dying anonymous and alone.  Kathleen has shown Darcie what having a loving family feels like and she has done that in spades. Darcie knew right to her last breath what it is to be completely, unconditionally loved.

Quiet friend who has come so far,
feel how your breathing makes more space around you.
Let this darkness be a bell tower
and you the bell. As you ring,

what batters you becomes your strength.
Move back and forth into the change.
What is it like, such intensity of pain?
If the drink is bitter, turn yourself to wine.

In this uncontainable night,
be the mystery at the crossroads of your senses,
the meaning discovered there.

And if the world has ceased to hear you,
say to the silent earth: I flow.
To the rushing water, speak: I am.

Let This Darkness Be A Bell Tower
~ Rainer Maria Rilke