Harley the ‘little dog with a big dream’ 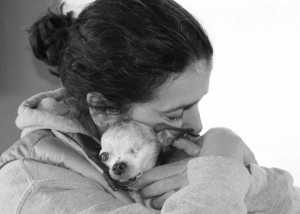 For a long time I’ve followed a page on Facebook that I find inspiring and touching both for the words I find there, as well as the images. And to enjoy the characterful one-eyed dog whose family use his story to campaign to close puppy mills. Harley is a dog whose story reaches out to many, and his family use his social media presence and website effectively to campaign, fundraise and push out awareness of the menace of the puppy breeding industry at every opportunity. I was delighted when Rudi, Harley’s human mum agreed to share more of his story with me here.

1. What breed is Harley and how did he come into your life?
Harley is a Chihuahua and I first saw a photo of him right after he was rescued. I felt very much that he needed to be with me for the remainder of his life; which at the time was thought to be perhaps 3 months. I contacted his rescuer by phone and we talked for a very long time. She agreed to meet me halfway with Harley. So I drove several hours to the middle of Kansas and saw “my boy” for the first time.

2. How long have you lived with Harley?
When Harley was rescued from the puppy mill he was said to be about 10 years old, and since then I’ve had him for 4 years and 4 months.

I have 5 rescue dogs. Harley, Cricket and Riley, all Chihuahuas, came from puppy mills; Olive, also a Chihuahua, was a show-breeder reject; and Stella, a 110lb Anatolian Shepherd came from a large breed rescue located in Denver.

4. What difference has Harley made to your life?
Harley has inspired me to be more proactive than ever in my involvement with puppy mill rescue and puppy mill awareness. He has made me a more patient and understanding person. He’s helped me realize how caring and giving people are; and made me realize there really is HOPE!

5. Does Harley go with you to work? 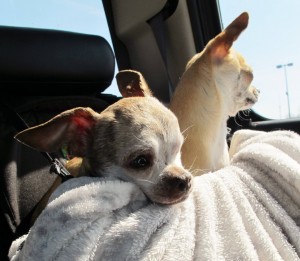 Yes he does, and he loves it! Harley is well-known in our small town of Berthoud, Colorado. He goes to the bank and the post office and he even sneaks in all the restaurants (with permission).

6. Does Harley go on vacations with you?
When we travel via car, Harley always goes with us. He loves to ride in the car and he can easily spend the entire day riding (sleeping)… with great pleasure! When we fly, Harley stays with his grandparents.

7. Can you tell me about one particularly special day in Harley’s life with you? 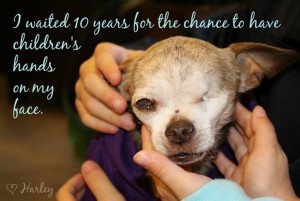 There have been sooooo many special days, it’s hard to choose just one! But one day that I think is particularly special was when we were on a road trip and stopped to visit a school in Griffith, Indiana. This was the first time Harley would be immersed into a very large group of children. Harley loves attention, but we were a little concerned about how he would react – as children often have a blunt approach and can be a little bit too handsy. HARLEY DID GREAT! He was handled by so many children. They loved him and he loved them. It was a great day. Very heartwarming and of course, a wonderful way to spread the word about puppy mills.

8. Tell me about any health issues that Harley has? 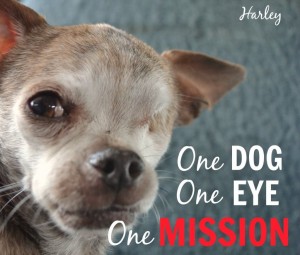 Harley has many health concerns. Currently he has heart disease, including an enlarged heart, and a lung condition called pulmonary hypertension. His heart murmur is a 5+. The 10 years he spent living in a cage caused the cervical section of his spine to become fused. His legs are crippled, he has severe subluxating patellas, and his tail is broken. He lost one of his eyes to a power washer while living in the mill; and his good eye has at most about 10% vision remaining. His feet/toes used to be very deformed, but they have straighten somewhat over the past few years, yet they are a little funny looking.

9. How would you describe Harley’s character?
Harley has a very interesting character. He’s curious, but cautious. He can be demanding, but in a very cute way! He is tremendously loving. He is wise and understanding.

Harley’s character certainly captures the interest and love of many and it’s easy to see why. Not only is he a striking looking dog, his family are abundant in their love and sharing of their special dog. He’s scooped several prizes and awards, including the prestigious cover photo appearance in Modern Dog Magazine, which once again helped raise awareness of puppy mills.

This week sees what might be Harley’s biggest story yet – aside from his rescue, which must surely be his best day of his life – he’s going to Hollywood as he’s one of 8 dogs in the The Hero Dog Awards.  This is an ambitious effort by the American Humane Association to honour extraordinary canine acts of heroism. Harley is in the Emerging Hero category (i.e. ordinary dogs doing extraordinary things). The star-studded gala takes place on the evening of the 19th and Harley will WALK THE RED CARPET to the stage to receive his award. What an exciting night this will be, and what a wonderful example of a dog that was once caged for years, and discarded by the ugly puppy mill industry. Truly a turn around to celebrate on all levels.

Harley is well known for his original catchphrase, used on his Facebook page and in his posts, and a more fitting few words it’s hard to imagine for this tiny, but formidable dog:

“Harley, the little dog with a big dream”

(All photos courtesy of Rudi Taylor)