After meeting our friends in the park this morning and Renae having a hurtle round with her best pal Teddy we headed over to the field as the clouds ominously thickened up and threatened a wet morning.

Everything was peaceful, we hadn’t seen any of the usual frequent field visitors and Renae and Susie-Belle were busy pootling around, minding their own business, checking out the morning smells when suddenly they both put on a more purposeful trot over to some trees.

﻿
Unusual place for them to explore I thought, it’s not one of their usual stops when we’re in the vicinity but didn’t think a lot more about what they were up to, until they went deeper into the trees and seemed to be on a bit of a mission.
Mission indeed…….out they both came back to me, Renae looking curious, Susie-Belle looking pretty chuffed with herself. 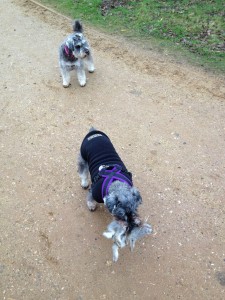 She’d found fresh breakfast for herself and seemed happy enough to bring it over to share with me. I was now faced with a bit of dilemma….we could take it home and they could have it for breakfasst, they are after all BARFed dogs and what could be wrong with a fresh whole rabbit, which incidentally looked rather perfect and peaceful in Susie-Belle’s jaws.

But I feel a bit silly and mean when I have to admit that I decided I was too whimpy to walk Susie-Belle home with a dead rabbit in her mouth. Problem was, she wouldn’t let it go, there was a determination on her part to hold onto her treasure that amazed me, I walked on with them both, hoping she’d lose interest and put it down, but nope, not a sign of her doing that.  Eventually, after about 10 minutes, she momentarily loosened her grip and I spotted my chance to gently lift her away from her new pal.

We left it on the side of the track, but I have to say that the handful of dry biscuits I gave Susie-Belle as a reward for being such a good girl and walking on with me, leaving the bunny behind without complaining did seem a very mean offering and poor sop to my conscience.